CULTURE IN CRISIS - CRISIS OF CULTURE 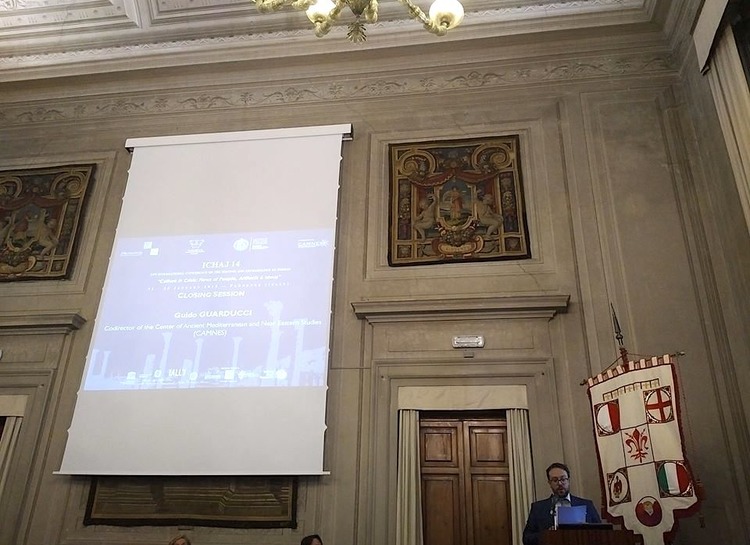 Your Excellencies, dear Colleagues,
Thank you very much for being here today.
We have reached the conclusion of this 14th edition of the International Conference on the History and Archaeology of Jordan (ICHAJ). It has been a true honor for my Institution, CAMNES; to participate in the organization of this broad and important event. We truly hope that your stay in Florence, attending the conference as well as in visiting our city, was interesting and satisfying as it was for us to coordinate this event.

Before giving you some insight on this edition and addressing more specifically my thanks I would like to briefly spend some words on the general theme of this edition. A theme that IS and MUST be a source of inspiration and at the same time an objective to reach and somehow taken care of.

The core topics of this 14th ICHAJ are the concepts of 'CULTURE’ and that of ‘CRISIS’. Two important aspects that carry a heavy burden, which sometimes we tend to forget, ore use, rather casually.

CULTURE. Most of us here are archaeologists and we tend to focus on the material dimension of this concept. Paraphrasing Lewis Binford, in 1965 (Binford 1965) he stated that, ‘material culture, more than reflecting a society and the people that made it, it TRANSFORMS society’. Hence, materiality plays an active and important role, it is in fact simultaneously cause and effect, by also conveying part of the cultural traits and values of those that produced and/or used it. Nevertheless, materiality is only a part of the broader concept of culture and its heritage. So, what is culture?

The definition elaborated by Michael Shanks (2001), based on structuralist principles, claims that ‘culture is the social production and reproduction of meaning’, or, as Bourdieu (1977) postulated, our habitus and, therefore, the production and reproduction of identity.
In other words, culture, in all its manifestations and practices, material and immaterial, is a paramount aspect in building, preserving and recreating the identity of a community, whether we are taking about a settlement of the 3rd millennium or a modern nation.
In this perspective, UNESCO, more than others, has developed the evolution of this concept, braking all boundaries, nationalisms and fundamentalisms: the concept of World Heritage, which may be read as a principle of Common Culture or Common Identity, two sides of the same coin, belonging to and ‘transforming’ all, humanity.

CRISIS. This word and the concept behind it, is commonly associated to a state of emergency, where the parameters of a specific context and situation start to decay and become unstable. A critical turning point in the lifespan of someONE or someTHING.
As Guido Vannini aptly pointed out during the ICHAJ Opening Session, the Greek roots of this term highlights also another and crucial value of this concept, that of decision (krisis, decision - from krinein, decide).
We must therefore decide how to act, during and after this harsh period of conflict and cultural decadence. Not only a period of Eastern Crisis, but also a period of Western Crisis, as the recent secession and closing approach of the US and of several European countries, including Italy, underlines.
So, Culture IN Crisis - but ALSO - Crisis OF Culture

During yesterday’s Special Event, in this respect, we have briefly analyzed and explored a specific and also privileged vantage point and modus operandi: that related to the archaeologist profile.
The traditional and, at times, anachronistic conception that sees an archaeologist as a mere technician and/or an academic, closed in a lab, perhaps a library or worse, excavating an area with a colonial approach, completely detached from its modern context, which in some cases endures in many countries, again including Italy, must cease. Archaeologists, due to their broad knowledge not only of the heritage of a specific country, civilization or site, but also of its territory, its people, its traditions as well as its issues and also its potential, are called to serve as cultural mediators...or at least they should be! That is, aid for the Culture IN Crisis, protection, reconstruction, restoration, technical and historical advice, data analysis & study along with local community training for all these practices, together with the people in charge of these operations; and also, as we said, aid for the Crisis OF Culture, communication, management, education etc., in a nutshell: Public Archaeology. The synergy of these two complementary aspects must characterize and, where needed, forge a new approach to this professional figure. From both, who decides to become an archaeologist and from whom interacts or should interact with her or him, under the auspices of a strict collaboration, where possible, with politicians, administrates, other scientists, law enforcement agencies, computer experts, and any other profile that is, or may, substantially contribute to the protection, enhancement and reconstruction of our cultural heritage, DURING as well as AFTER a crisis.
I think that you would agree if I say that all of us, truly and deeply hope that this approach will become a standard procedure, and not an enlightened option.

Changing subjects, considering that CAMNES coordinated also the Scientific Secretariat, we would like to give you a few numbers on this ICHAJ Florentine edition:

Without further due, I would like to thank HRH Prince El-Hassan Bin Talal for its presence and especially for his inspiring words pronounced during the Opening Session and yesterday’s interview;
Moreover, I would like to deeply thank the Department of Antiquities of Jordan, its director Yazid Elayan, for the strong and active support all along this perilous Journey, and in particular Hanadi Al Taher and Omar Nofal for their constant help. Naturally, I must deeply thank the University of Florence, in particular Guido Vannini and Michele Nucciotti for including us in this terrific and at the same time, mad project! A sincere and admired thank you goes out to our strict collaborators and friends, Chiara Molducci, Elisa Pruno, Lapo Somigli, Francesca Cheli, Andrea Biondi, Chiara Marcotulli, Laura Torsellini and Laura Lazzerini. Thank you for sharing all the madness! My final but most profound thank you goes to the Staff, in particular the chiefs Valentina Santini and Raffaele Ranieri, but also our ‘blue angels’: Benedetta, Dimitri, Gemma, Diletta, Leonardo, Giacomo, Sofia, Chiara, Miryam, Arianna, Martina, Annamaria, Silvia e Iulia, without whom, simply the Conference would not have been so successful. Finally thank you, academic and scientific colleagues for your tremendous works. Please continue what you do, but, with an open eye and an open hand for our Culture in Crisis and our Crisis of Culture.
THANK YOU ALL!!